As of this year, the HCII conference has established the “HCI Medal for Societal Impact” to be awarded, during the Opening Plenary Session, to distinguished HCI academics, researchers, or professionals in recognition of the impact of their work in the field of HCI to society. 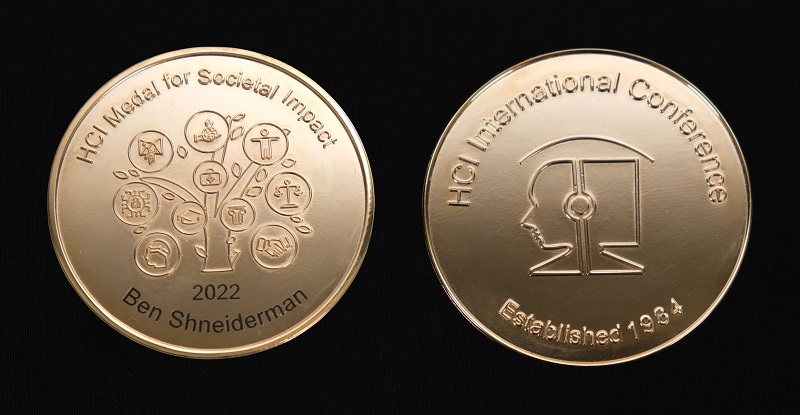 The HCII2022 Conference is proud to announce that the first recipient of the newly established “HCI Medal for Societal Impact” is Ben Shneiderman, Emeritus Distinguished University Professor of Computer Science at the University of Maryland and founder of their Human-Computer Interaction Lab. We celebrate his innovative science, engineering, and design breakthroughs in theory and practice, as well as his tireless efforts to initiate and transfer HCI research outcomes to society. His recent efforts on Human-Centered AI carry forward his philosophy of supporting human creativity, self-efficacy, responsibility, and social connectedness. Much work remains to be done, but his transformative efforts improve the lives of every technology user.

Ben has been elected as a Fellow of many professional societies and as a member of the prestigious U.S. National Academy of Engineering in recognition of his pioneering contributions to human-computer interaction and information visualization. His contributions include the direct manipulation concept, which led to the essential clickable highlighted web-links, the ubiquitous small touchscreen keyboards used by billions of people on mobile devices, and a key patent for photo tagging. His work on information visualization led to the successful commercial product, Spotfire, and the widely used treemaps, which are in most visualization tools including Excel. Treemaps are used regularly in media reports on economics, stock markets, voting, and other applications. Novel network visualizations and temporal event sequence analysis for electronic health records are additional success stories. His early devotion to accessibility and universal usability has broadened the benefits of information technology.

Ben has received Honorary Doctorates from six universities on four continents, and has written more than 20 influential books, which have been translated into many languages and used as textbooks in HCI courses worldwide. His publications have been cited more than 100,000 times, demonstrating the breadth of his impact. Ben’s contributions epitomize the attributes of this award.